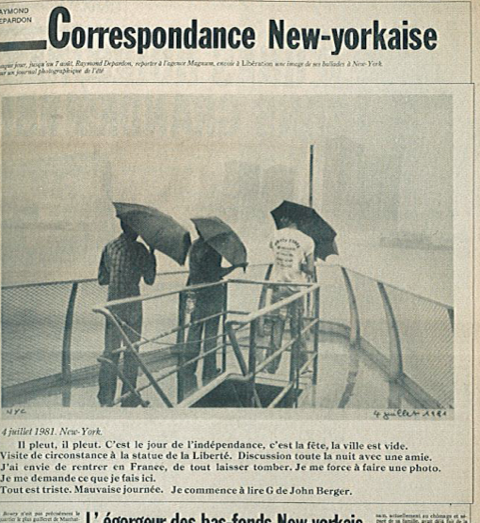 “July 4, 1981. New York. It rains, it rains. It is Independence Day, a holiday, the city is empty. A visit to the Statue of Liberty. Discussion all night with a girlfriend. I want to go back to France, to let everything go. I force myself to make a photo. I ask myself what am I doing here. All is sad. A bad day. I begin to read G by John Berger.”

Henri Cartier-Bresson defined photojournalism to me as keeping a journal with a camera. The addition of the first-person perspective, presenting a photograph of the world while providing access to one’s own personal musings, allows a transparency that can create a more credible bond with the reader. Rather than hold onto the idea of the photographer working in a journalistic capacity as an objective witness, it encourages the viewer to empathize not only with the subjects of the photograph, but with the person who made the image as well.

One can now easily link the name of the photographer credited with the image to the photographer’s own website, allowing an interested reader to have a greater sense of the photographer’s experience, approach and ethics. Or, as in the case of Raymond Depardon’s “Correspondance New-yorkaise (New York Correspondence),” a 1981 project for the Paris daily newspaper Libération (working with its picture editor, Christian Caujolle) during which he transmitted one photograph and an accompanying diary-like text to be published on the newspaper’s foreign-affairs page each day for a month, one can narrate in both the first- and the third-person. The photographer is thus presented to the reader as simultaneously subjective, human, and discerning.

For example, underneath the gray-toned photograph (above) of three men shown from the back, Depardon writes that it is Independence Day, that it is raining, that he has visited the State of Liberty, and then opens up to the reader about his personal feelings of sadness and nostalgia for his home in France, of forcing himself to make the photograph, as well as a discussion he had with a girlfriend and the novel that he is beginning to read. Rather than
depending up on the photograph to communicate the reality of New York, his writing anchors the image in his lived experience.

Depardon’s work allows the “camera reality” (the men on the ferry in the rain) to be contravened by a text that calls the viewing into question—would the image have been rendered as sadly were its author in a different frame of mind, or if someone else had made the photo? Might it not be interesting to have photographers around the world keeping such journals and making them available to readers who want to go beyond the official pronouncements and the events judged to be exceptional and newsworthy to find out how lives are lived on a daily basis? As with Depardon, a French photographer visiting New York, there could be room for both insider and outsider points of view. The framing would not only be in the photograph, but in the perspectives expressed in the photographer’s text as well.