Books > Bending The Frame: Photojournalism, Documentary, and the Citizen 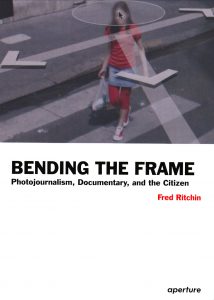 The book begins: “What do we want from this media revolution? Not just where is it bringing us—where do we want to go? When the pixels start to settle, where do we think we should be in relationship to media—as producers, subjects, viewers? Since all media inevitably change us, how do we want to be changed?”

It argues for the “useful photographer” whose work impacts the world in beneficial ways, rather than someone who makes pictures that fit into a pre-existing system that may have minimal effect on future events. It asserts the need for a proactive “peace photography,” one that prevents and diminishes calamities, rather than celebrating a “photography of war” that more typically reports on catastrophic consequences. It explores numerous projects focusing on their innovative strategies as well as their impacts on society, from one that helped 8 million HIV-positive Africans receive anti-retroviral drugs, to another that turned photojournalism into a diary that was featured on the foreign affairs page of a French daily newspaper, to another that helped to close down a maximum security prison in the United States. It also investigates the need for transparent ethics for image makers, and for an embrace of authorship by the photographer, including the need to transcend previous categories applied to the photographic enterprise. How can a photographer be useful when journalistic platforms are under assault by multiple forces? How can be photography be transformed so as not to rely upon its previous mythologies?

View a PDF of the preface and first and second chapters.