Books > In our Own Image: The Coming Revolution in Photography 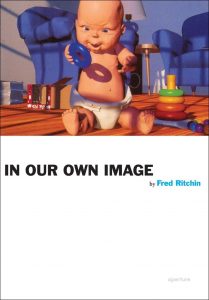 This is the first book to explore the profound and destabilizing impact that the digital revolution would have on photography. While providing a larger sense of what was to come, it asserted that the credibility of the photograph could be mortally wounded unless measures were taken to preserve what was valuable about the photograph as a visual record.

The cover image was a frame of a synthetic baby from Tin Toy, the first computer-generated movie to win an Academy Award. When Life magazine was first published in 1936, it too published a photograph of a baby at the beginning of the magazine, this one an actual human being born. Both babies signaled the birth of an era, but markedly different ones.

The book was widely reviewed and discussed in publications and news outlets worldwide, often with dismay at what was being foretold. Soon after its publication, I was invited to appear on the Today Show with an executive of Adobe, Russell Brown, who used the occasion to demonstrate a new product, Photoshop, aided by Rick Smolan of the Day in the Life series of books. Our appearance was broadcast the day after Iraq had invaded Kuwait, beginning the first Persian Gulf War, an interesting juxtaposition given that this war was the first to be reported on largely from the vantage point of simulations and “smart” bombs, while photographers were mostly banned. “Fake news” and “alternative facts” would not be far behind.

View a PDF of the introduction to the book, in the latest edition.
Watch the Today Show appearance here.